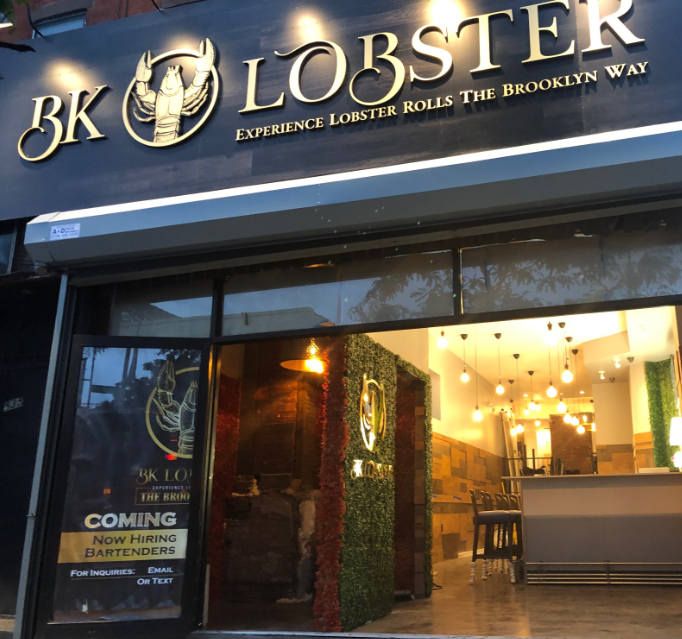 NEW YORK, NEW YORK (AUGUST 8, 2019): CEO and Founder Rodney Bonds announced today that he will unveil the “Golden Lobster Roll,” the first-ever gold-infused lobster roll, at the official opening of BK Lobster. The extravagant seafood item is laced with 24K gold leaves (and has a glass of 23K wine companion included) making it Instagram love at first sight. BK Lobster is the newest entry in the fast-casual dining market that offers a menu includes a lot of different lobster rolls named after various areas in Brooklyn: the Bay Ridge Roll, Flatbush Roll, Coney Island Roll, Brooklyn Latin Roll, and the BK Sauce Roll. Each roll has ingredients inspired by its moniker, and with vegan elements. The Flatbush Roll, for example, has jerk sauce representing the area’s Caribbean community. And the Lobster V-BLT is decadent with vegan bacon. The vegan elements make the lobster rolls an excellent choice for seafood lovers, pescatarians, flexitarians and semi-vegetarians who are considering the vegan lifestyle or currently transitioning to become a vegan.

Bonds came up with the idea for BK Lobster when he noticed that the lobster roll shop had become quite a phenomenon in recent years but was not available in several key locations around the country. With this in mind, he created an exquisite menu and decided to expand. “With all of my restaurant franchise experience, I decided to fill a void and create an opportunity in Brooklyn to create the concept, ‘BK Lobster,’ the lobster roll shop from Brooklyn to beyond,’” he says. ” As a veteran of the franchise industry, I am thrilled to offer an exciting business opportunity for foodies. BK Lobster is uniquely positioned in the fast-casual arena, and we know that residents will love our approach to serving quick lobsters in a luxurious setting.”

The acclaimed entrepreneur honed his skills at franchise development while spending 15 years as a Master Franchise Developer for a real estate franchise company which he helped grow from one to sixty-five locations in a matter of nine years. Bonds was hands-on with the sale and development of twenty-four franchises in metropolitan аrеаs including Atlanta, Miami, Dаllаѕ and New York, until he secured a buyer and negotiated the acquisition of the company. During that time, he transitioned into the restaurant business, owning and operating Magic Soul Food, which he purchased and help expand into 7 locations in New York. He is currently hard at work on the launch of the BK Lobster restaurant franchise so that, as he puts it, “It is so simple and fun that anyone can own one.”

ABOUT BK LOBSTER
BK Lobster is a fast-casual meet luxury restaurant franchise set to open its first location this year and offers franchise opportunities. Based in Brooklyn, NY its menu emphasis is on offering a variety of lobster rolls, with a special added emphasis on the use of the finest lobster from Maine and vegan elements for the creation of their culinary treats. Reservations are not required at the restaurant, which emphasizes a casual and upscale dining experience. The restaurant can accommodate up to 150 people for private parties and has an infrastructure to cater well to their various culinary needs. New York residents can place orders online at GrubHub and Doordash. This new restaurant franchise is set to change the landscape of seafood dining by providing instant name recognition and built-in marketing to business owners who purchase the right to own and operate a BK Lobster. The expansion to Harlem, Miami, and Los Angeles are part of the brand’s overall franchise development plans for this year to open three additional restaurants by the end of 2019. The company is currently seeking single, multi-unit and regional Master Franchisor owners in the brand’s rapid expansion. For more information about franchise opportunities, connect with BK Lobster online at https://bklobster.com/own-a-store/ and franchise@bklobster.com. For more information visit www.bklobster.com.